Publish Date : Sunday 3 March 2019 - 16:52
IBNA- ‘An Entire Summer without Facebook’, the fourth novel by French author ‎Romain Puertolas which has released in Iranian market is rather a tribute to the history ‎of world literature than a crime novel. ‎ 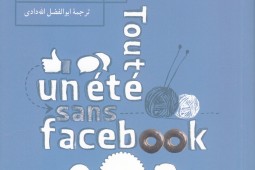 According to IBNA correspondent, ‘An Entire Summer without Facebook’ (Tout un été sans Facebook) has been translated into Persian by Abolfazl Allah-Daadi and released by Qoqnous Publishing in Tehran.

The novel synopsis reads: “Detective Agatha Crispies makes an error and is banished to somewhere called New York which of course is different from the famous megacity. “This” New York is a strange place, a small village in the depths of America, without a mobile cover where has 98 squares but only one traffic light and nothing happens there.

But with all these idleness, one day Agatha investigates a murder other than that of a pet, a series of appalling assassinations and disappearances (finally) disturb the tranquility of the place, putting to the test her efficiency.”

Romain Puertolas is most noted for the bestselling French novel ‘The Extraordinary Journey of the Fakir Who Got Trapped in an Ikea Wardrobe’, which has been translated into English and has become an international bestseller sold in 36 nations.

‘An Entire Summer without Facebook’ in Persian has been published in 447 pages and 1100 copies.