Publish Date : Sunday 20 January 2019 - 17:56
IBNA- At a ceremony in Isfahan, Will Parks, the UNICEF representative in Iran stated that ‎he loves the work of Mowlana Rumi and Persian literature in general. ‎ 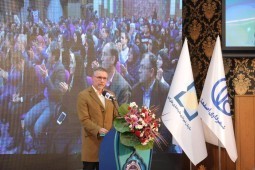 Will Parks
According to IBNA correspondent in the major Iranian city of Isfahan, the First National Conference on Child Friendly City was held with Will Parks (PhD) in attendance who began his speech with referring to a poem by Mowlana Rumi.

“I appreciate holding the First National Conference on Child Friendly City. This event was a dream came true after three and a half years in Isfahan,” he said.

Parks referred to the UN Convention on the Rights of the Children regarding urban development: “The plan of child-friendly cities takes issues like intelligence, flexibility healthy and green spaces in the development of these cities into consideration.”

The First National Conference on Child Friendly City was held on January 16-17 with representatives of 31 Iranian provinces in attendance. The event was held in cooperation of Iran’s Interior Ministry, UNICEF and deputy of Urban Planning and architecture of Isfahan Municipality.

There are over 3000 Child Friendly Cities in 40 countries which try to meet the ‎children’s demands with respect to urban issues.