Publish Date : Friday 14 December 2018 - 17:28
IBNA- The international Congress of Iran in Transition will consider the historical ‎developments of our country from the beginning of Constitutional Movement to the end of ‎Qajar era.‎ 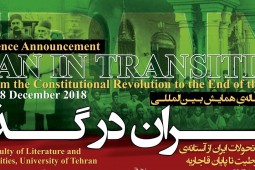 Based on three main axes aims to review a significant stage in Iranian history:

1) Thought and Culture; with subcategories such as the idea of freedom and law, free journals and Iranian intellectuals, the role played by translation in the emergence of new concepts in Iran, Constitutional Movement and new critics.

2) Economy and Policy; with subcategories such as: protest, movement and revolution, national economy and political struggle.

3) Developments And International Relations with subcategories such as the role of foreign advisors and countries in the local developments of Iran and the representation of Constitutional Movement in the foreign travelogues.