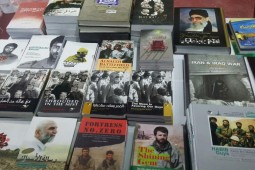 245 Arab and foreign publishing institutes from eight countries, including Kuwait, Egypt, Sudan, Oman, Palestine, Iran, and Ukraine have participated in this year’s edition with 170 Lebanese publishers, as well as 75 foreign and Arab publishers. Nashr 27 Be’sat has participated in the event with two other Iranian publishing houses.

The annual event is organized by the Arab Cultural Club and the Union of Publishers in Lebanon. Many Publishers and Librarians are participating in the Beirut International Arab Book Fair.

The books put on display in this event cover different topics such as fiction, poetry, children and young adults books, economy politics and so forth.

First launched in 1956, the Beirut International Arab Book Fair has been permanently held even during the Lebanese Civil War and the Zionist regime of Israel’s invasion to the country.