Publish Date : Tuesday 4 December 2018 - 18:15
BNA- The book ‘Sketches of Iran’ based on notes by Scottish diplomat and historian of the ‎‎19th century John Malcolm, will be reviewed at a meeting in the House of Literati affiliated ‎to Iran’s Book House Institute.‎ 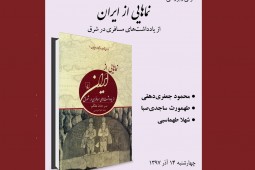 According to IBNA correspondent, the program which has been scheduled for Wednesday, December 5 will be attended by Iranian experts Mahmoud Ja’fari Dehaqi, Tahmoureth Sajedi Saba and Shahla Tahmasbi.

‘Sketches of Iran’ has not been exactly written by Sir John Malcolm but is based on his notes during his missions in Iran particularly his first mission which describes Iranian social life and temperament as well as Persian literature.

Later that year he was selected by the Governor-General (Lord Mornington, later Marquess Wellesley) to lead a diplomatic mission to Iran. Following his return in 1801 he became Wellesley’s private secretary, based in Calcutta (Kolkata).

In early 1808 the Governor-General, sent him on a second mission to Iran during the "Qajar era, but at this time French influence was dominant in Tehran, and he was rebuffed. Later that year a separate mission from London under Sir Harford Jones arrived in Iran and achieved success, the Iran government having by then become disenchanted with the French.

Malcolm was again sent to Iran in 1810, but by that time the British government had decided to conduct diplomatic relations with Iran directly from London, and appointed another diplomat as the ambassador.

Malcolm wrote nine books, plus a volume of poetry.

In describing Iran, he uses the omniscient point of view, perhaps in order to be able to express his ideas and feelings about the Iranians which are mostly imbued with hostility, grudge and humiliation indirectly.