Publish Date : Monday 15 October 2018 - 21:38
IBNA- On the third day of the 70s at Frankfurt Book Fair a German publisher interested in ‎books on the Middle East held negotiations on purchasing copyrights from Iranian ‎publishers.‎ 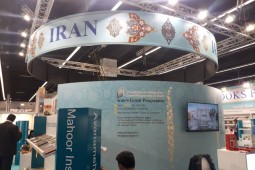 According to IBNA correspondent reporting from Frankfurt, the third day of this event was the last day for meeting among the professionals of publishing industry which obviously caused busy hours.

The head of Iranian Women Publishers Association Maryam Jadali described the negotiations held with foreign publishers: “We could sell copyright of any Iranian book to a Georgian publisher and Patra publishing from that country has expressed interest in purchasing the copyrights of Iranian books for children and young adults.”

She added that a director from Amazon is also eager to cooperate with Iranian Women Publishers Association in the field of fiction books.