Publish Date : Saturday 8 September 2018 - 18:38
IBNA- Directors of Iran’s Book House Institute (IBHI) and ECO Cultural Institute signed a ‎Memorandum of Understanding for cooperation between the two entities at a meeting in ‎Tehran on Wednesday.‎ 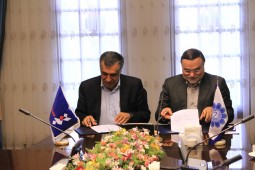 Chairman of ECI Mohammad-Hassan Mazaheri said at the meeting: “We are particularly interested to the issue of a books and readership, as poetry and literature are among our priorities for cultural diplomacy; so we are ready to make our facilities available to Iran’s Book House Institute and provide intellectual and international support for the institute.”

“ ECO Cultural Institute have signed memorandum of understanding with a number of organizations such as the Iranian Association of Women Publishers, the University of Tehran, Shahid Beheshti University and Allameh Tabatai University and these agreements can be modified into trilateral MoUs to include IBHI as well ,” he said.

“We are able to further our cooperation with the Book House in holding ceremonies such as unveiling books and holding Awards ceremonies in ECO region,” Mazaheri added.

Referring to discussions of Echo with 90 foreign Ambassadors to Iran, he said: ECO is ready to cooperate with IBHI in holding other Award ceremonies for example Book of the Year World Award which is organized by the Book House.

Following the session, Hosseinipour said: “The subjects related to culture speak to people's hearts. We in Iran’s Book House pursue a variety of activities relevant to book and readership. For example, we have registered the name of 18000 Iranians who are involved in producing books; such as authors, translators, editors and proofreaders.”

“Regarding the potentials of Echo Cultural in terms of cultural diplomacy, CEO of IBHI stated: “The honors and prizes granted by ECO can be institutionalized within the framework of the Book of the Year World Award. Moreover, IBNA may contribute to publish news about the activities and events of ECO Cultural Institute.”