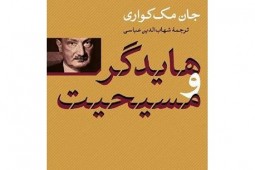 According to IBNA correspondent, ‘Martin Heidegger (Makers of Contemporary Theology)’ has been translated by Shahab al-Din Abbasi into Persian and released by Parse Translation and Publishing Agency in Tehran. Macquarrie’s earlier co-translation of the notable book by Heidegger, ‘Being and Time’ into English is considered the canonical version.

A review of ‘Martin Heidegger’ by Macquarrie reads: “This study of Heidegger is a remarkably lucid general introduction to his thought. As one might expect, there are a number of illuminating comparisons between Heidegger and other theological literature, including gnosticism, Barth, Bultmann, Tillich, and Heinrich Ott. The account of Heidegger on God is among the most meritorious features of the book. there is an excellent glossary which explicates clearly, simply, and accurately many important words in Heidegger's vocabulary.”

Macquarrie remains one of the most important commentators and explainers of his most important philosophical influence Martin Heidegger. However, in ‘Martin Heidegger (Makers of Contemporary Theology)’ he has his own critique of Heidegger, for example in terms of ethics. Macquarrie was also a notable English-language expositor on the theological and philosophical work of Rudolf Bultmann.