Publish Date : Wednesday 9 May 2018 - 20:18
IBNA- The novel ‘Journey to 270 Degree’ by the Iranian writer of the Sacred Defense Ahmad Dehqan which has already been translated into English and Russian was published in Italian. 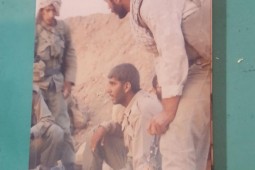 In an interview with IBNA, Dehqan who is best known for this work said: “The novel was first published in 1996 and found the chance to be translated into English, Russian and now Italian.”

“The translation of ‘Journey to Heading 270 Degrees’ into Italian which has been carried out by Mikele Marly took almost a year. In the meantime, the translator once traveled to Iran and we discussed the problems of translation of ambiguous words to Italian,” he added.

‘Journey to Heading 270 Degrees’ is a novel about the Iran-Iraq War called in Iran, the Sacred Defense. It tells the story of Naser, a veteran of several battles, while in high school. Unable to resist the pressure to join the military, he returns to the war front to find himself in the midst of one of the war’s most decisive clashes.

The Iraqis attack Iranian fortified positions in tanks while Naser’s unit repels them on foot. During the battle, Naser loses several comrades but gains an understanding of the futility of conflict.

The book is released by Jouvence publishing House in Italy.