Introducing Rumi to the West, an amazing gift 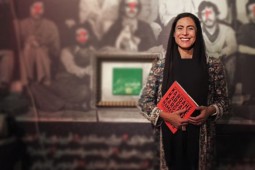 Nahal Tajadod
In a brief interview with IBNA, Tajadod who is the wife of the legendary French playwright, screenwriter and director Jean-Claude Carrière referred to her books on Rumi (his biography, translation of a hundred of his ghazals and an interpretation of ‘Masnavi’) which have been welcomed by French people and were even translated into English, Arabic, and Turkish.
Nahal Tajadod was born on February 25, 1960 in Tehran. Her father Reza Tajadod was a writer and her mother Mahin Jahanbaglou was among the woman pioneers of playwriting in Iran. In 1970s, Nahal traveled to France to pursue her education and began to study Chinese language and literature at the National Institute of Oriental Languages and Civilizations where she received a PhD degree. Nahal wrote a thesis on Mani, founder of Manichaeism and is a specialist in Buddhism, as well as Christianity in Iran and the great Rumi.
Her works written in French include: ‘Mani, the Buddha of Light’ (1990); ‘The Light Bearers: adventures of the Christian Church of Persia’ (1993); ‘In the footsteps of Rumi [preface by Jean-Claude Carrière] (2006), and ‘Rumi: The Fire of Love’ (2011).
In the interview, she was asked about the companionship of Rumi and his mentor Shams-e Tabrizi and said that their relationship is above description and interpretation. It’s so difficult to say what would happen to Molana Rumi or what he would do if he did not meet Shams.
She added that however, the influence of Shams on Rumi was extraordinary as it dramatically evolved him into one of the legendary characters of the Iranian-Islamic mystic poetry.
Tajadod noted that like Farid al-Din Attar, the works of Rumi top the world of mysticism. At the moment they offer the most beautiful humane way to serenity and wisdom.
Before meeting her future husband, Nahal said, he had written a play based on ‘Conference of the Birds’ by Attar which was then directed by Peter Brook. However, she hopes that could have played a role in promoting Carrière’s boundless fascination with Iranian mysticism and Rumi.