‘Layla and Majnun’ in French released 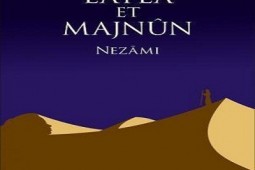 According to IBNA correspondent, the French literature scholar Isabelle de Gastines translated the work by the great Iranian poet and mystic of the 12th century Nezami Ganjavi which was published and released by Fayard Publishing House in France.
‘Layla and Majnun’ was composed in the form of Masnavi [double-rhymed verses], third from the series of Quinary (‘Panj Ganj’ or ‘Khamsa) by Nezami who draw influence from Arabic and Persian anecdotes.
In the story, two children, Qays and Layla fall in love with each other when they are young, but when they grow up, Layla’s father doesn't allow them to be together. Qays becomes obsessed with her, and the community gives him the epithet Majnun (lit. "crazy").
When he asked for her hand in marriage, her father refused because it would be a scandal for Layla to marry someone considered mentally unbalanced. Soon after, Layla was married to another noble and rich merchant.
Layla is moved to another place with her husband, where she became ill of heartbreak from not being able to see her beloved and eventually dies. Majnun was later found dead in the wilderness near Layla’s grave; while her love takes him to heaven.