Publish Date : Thursday 15 June 2017 - 20:44
IBNA- Director of Nargol Publications gave news about the release of new Persian books series on Sacred Defense titled ‘Beyond the Earthwork’ based on the comments made by the former leaders of Iraqi Ba’ath Party. 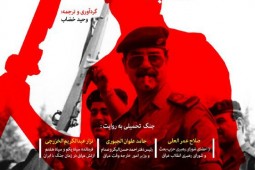 According to IBNA correspondent, Director of Nargol Publications in Tehran Ali Asghar Bahman-Nia, the first book from the series is called ‘Under the Skin of War’ which have been collected and translated by Vahid Khazab which features the sayings of Salah Omar al-Ali one of the key figures of the Ba’ath Party which was ruling Iraq at that time.
Omar al-Ali was a minister and ambassador in 1970s Iraqi and later was appointed the Permanent Representative of the country to the United Nations in New York. However, a you months after Iraq’s invasion to Iran, he resigned from his position and was banned from coming back to his country. Then he turned to an opposition figure against the regime of former Iraqi dictator Saddam Hussein.
‘Under the Skin of War’ was published in 176 pages with a print run of 2500 copies.