Publish Date : Thursday 1 June 2017 - 19:02
IBNA- The book 'Wing of Fire, Wing of Blood', a narrative on the life of Iranian ace pilot fighter and a national hero, Major General Abbas Dowran who was martyred during the 'Sacred Defense', was published. 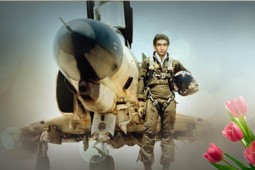 According to IBNA correspondent, the narrative book was compiled by Mustafa Jamshidi based on historical evidences and the accounts made by his comrades and family on Martyr Dowran was one of the best fighter pilots in the Iranian Air Force. 'Wing of Fire, Wing of Blood' was published by the Iranian Army’s Ideological and Political Organization Press.
General Dowran attended the Undergraduate Pilot Training Program at Columbus Air Force Base. He graduated in the autumn of 1972 as a member of Class 73-02. he participated in air strikes with his F-4 Phantom fighter against the Iraqi Navy during Operation Morvarid (Pearl) in October 1980.
He was valued for planning IRIAF operations missions against Iraqi military with a high rate of success.
But his main heroic act was carried out in his last mission in July 21, 1982 when Iraqi dictator Saddam Hussein planned to host the 7th Summit of the international Non-Aligned Movement in Al-Rashid Hotel, Baghdad. On the same day, during an operation Dowran bombarded Al-Doura Refinery in Baghdad but his fighter was hit by an Iraqi surface to air missile
His weapon systems officer ejected from the plane and was taken as a prisoner of war, but Dowran continued flying with his damaged aircraft and directed it toward a square near Al-Rashid Hotel where he martyred but severely challenged Sadam’s idea of Baghdad security. Therefore, the summit was scheduled to be held in New Delhi.
'Wing of Fire, Wing of Blood' features two chapters and describes various stages of Martyr Dowran’s life the to focus on his personality as well as his love for his wife and his country.
The book features 135 pages with a print run of 1000 copies.