Persian translation of ‘Understanding Hegelianism’ to be reviewed

Publish Date : Sunday 28 May 2017 - 21:14
IBNA- Persian translation of the book ‘Understanding Hegelianism’ by Robert Sinnerbrink will be reviewed at a meeting in Tehran’s Book City. 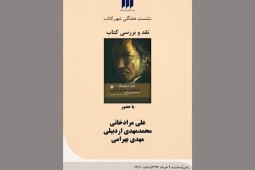 According to IBNA correspondent, ‘Understanding Hegelianism (Understanding Movements in Modern Thought)’ by Robert Sinnerbrink was translated by Mahdi Bahrami and published by Lahita Publications in Tehran.
‘Understanding Hegelianism’ explores the ways in which Hegelian and anti-Hegelian currents of thought have shaped some of the most significant movements in twentieth-century European philosophy, particularly the traditions of critical theory, existentialism, Marxism and poststructuralism.
The book examines Kierkegaard's existentialism and Marx's materialism, which present two defining poles of subsequent Hegelian and anti-Hegelian movements.
‘Understanding Hegelianism also looks at the contrasting critiques of Hegel by Lukacs and Heidegger, which set the stage for the appropriation of Hegelian themes in German critical theory and the anti-Hegelian turn in French post-structuralism.
The meeting is scheduled for Tuesday, May 30 with the translator of the book and the number of Iranian experts in attendance at the Cultural Center of Tehran’s Book City.