Publish Date : Saturday 22 October 2016 - 22:51
IBNA- ‘Arvand-Khoon’ (Arvand, The River of Blood) is a play written based on the story of 175 Iranian divers who were painfully martyred during the Sacred Defense which is published by Siraf publications. 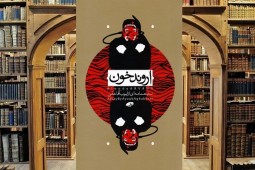 According to IBNA correspondent, written by the Iranian playwright and actor Ayoub Aghkhani, ‘Arvand-Khoon’ is the third work from a trilogy created by this author based on the documents of the Sacred Defense (the 8-year war former Iraqi dictator Saddam Hussein imposed on Iran).

The play is based on a true historical event which happened during the operation Karbala 4 launched by Iran against the Iraqi forces when Iraqi captured 175 Iranian divers. The victims’ hands tied and they had no injuries proving that they were buried alive. The bodies of the martyr divers were returned to Iran in 2015 which caused a very emotional response.

‘Arvand-Khoon’ is published in 56 pages with a print run of 1100 copies.
Furthermore, earlier in 2015, Iranian filmmakers launched the production process of ‘175 Divers’, a feature film about this historical event.