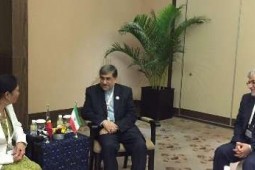 According to IBNA correspondent, the meeting between Iran’s Minister of Culture and Islamic Guidance and the Minister of Culture, Arts and Tourism of the Democratic Republic of East Timor held on Wednesday, October 12, 2016.
The event which was attended by the Iranian Ambassador to Indonesia and East Timor ‘Vali ol-llah Mohammadi’, the organisation of cultural weeks was stressed and agreed on.
In this meeting, Jannati said: “We are ready to translate a book in Persian and publish it in collaboration with East Timor.”
Pointing out that the Islamic Republic of Iran was one of the first countries to recognize the independence of East Timor, Jannati said: “East Timor’s independence was a source of joy for people and friends of this country and the Islamic Republic of Iran.”
He continued that Iran and East Timor are located at great geographic distance from each other, but there has been a close relationship between the Iranian nation and the people of this region since the old times.
Referring to the artefacts found in the area, the Minister of Culture and Islamic Guidance said that the findings indicate the depth of relations between Iran and this region of Asia.