Publish Date : Monday 10 October 2016 - 23:55
IBNA- In his travelogue, Italian author Pietro Della Valle who visited Iran in 1618 reported on the Ashura Ceremony held in our country describing rites and elements of the event from black wearing neighborhoods to mourning bands in cities. 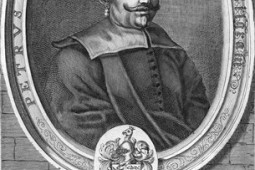 Pietro Della Valle
According to IBNA correspondent travelers and tourists who journeyed to Iran in Safavid and Qajar era have referred to interesting points about the Iranian ceremony in the month of Muharram.
In fact, travelogues are valuable sources which highlight different aspects of the Iranian social history, particularly where it is hidden from the eyes of the Iranian historians. It is with the assistance of these travelogues that reconstruction of social, cultural, etc. spaces in the past becomes possible and on the same basis it may be claimed that travelogues include points that are very important in cultural historiography. One of the most important issues that are addressed in these travelogues is Muharram ceremonies among Iranians. The rituals performed in this month contain valuable cultural points that are portrayed in an interesting way by the European tourists.
The Italian traveler and author Pietro Della Valle, who visited Iran in Safavid era, is one of these travelers who has made interesting remarks about this event.
Pietro Della Valle’s itinerary is one of the most important of these travelogues that contains valuable information about the Iranian customs and their mourning in Muharram. He describes the event in Karbala as such: “Imam Hussein was attacked by his enemies, known as ‘Khavarej’ by Iranians, while travelling and was killed in Karbala together with seventy or eighty of his companions. He is buried there and his shrine is a pilgrimage of the Muslims who even travel from distant places to this city.”