Publish Date : Wednesday 20 April 2016 - 23:59
IBNA- In Sa`adi and Confucius Conference, the Iranian expert Abolqassem Esma’eilpour said that although Confucius lived in the 5th century B. C. much earlier than Sa`adi, his thoughts are very close to Sa`adi. 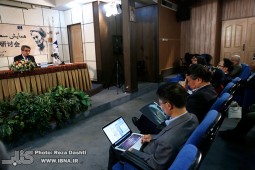 According to IBNA correspondent, the second day of Sa`adi and Confucius Conference was held on Monday, April 19, 2016, in Shahr-e Ketab (Book City) Institute, attended by the Iranian experts Abolqassem Esmaeilpour (PhD), Mohammad Dehqani (PhD), Gholamreza Khaki (PhD), Mahdi Mohabati, Sha Zong-Ping from China and those interested in literature.
At the beginning of the ceremony, Dr. Esmaeilpour said: “Confucius had a hard life and had to move from one city to another in his childhood and youth. He rose to fame at the age of 50 and even became a Grand Minister. Confucius lived in the 5th Century B.C. and had a great time difference with Sa`adi, but his thoughts were very close to Sa`adi’s.
He continued that perhaps the most striking difference between Sa`adi and Confucius is their beliefs, as Sa`adi was a man who believed in religion, and was a mystic and God lover, but in the works of Confucius, lyricism and religion are not found.
The Professor of Shahid Beheshti University described the common features of Sa`adi and Confucius and said: “Confucius compiled a book of poems which reflects his interest in literature and art. At the end of his life, Confucius was faced with unkind attitudes that made life hard for him and his life resembled that of Amir Kabir (Qajar Grand Minister) in Iran.
He added that from a Confucian view, the perfect human being possesses dignity, sincerity and enthusiasm to do good deed. He sees the sky as the manifestation of God and this indicates his faith , but his beliefs differ from ours.