Publish Date : Monday 7 March 2016 - 23:59
IBNA- Stressing the development of reading culture in rural areas, Culture Minister Ali Jannati said that arrival of books in villages is like sowing the seeds of knowledge in the heart of the village youths. 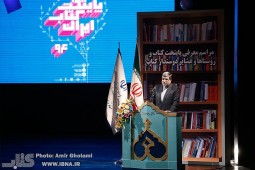 According to IBNA correspondent, the closing ceremony of the second edition of two festivals “Iran’s Book Capital” and “Book-loving Villages and Nomadic Tribes” was held on Monday, March 7.
The event was attended by the First Vice President of Iran Eshaq Jahangiri; Minister of Culture and Islamic Guidance Ali Jannati; Director General of the Central Bank of Iran Valiollah Saif and a group of representatives of Majlis (Parliament) at Vahdat Hall in Tehran.
Speaking at the event, Jannati referred to the festival of “Book-loving Villages and Nomadic Tribes” and said: “Whether in the rural or in the urban communities, libraries are always a source of knowledge and wisdom. To us, library is not an imported, modern phenomenon, as Iranians have always been familiar with books throughout the history and had large libraries in their own country.”
He went to say that this cultural heritage needs a great movement in villages which is fortunately carried out by villagers themselves and this worthwhile effort is a source of pride in this administration, and holding this festival is one of the most important measures taken for the cultural development of the society, as whatever activity carried out in villages will be beneficial to the whole country.