Memoir book of Brigadier General Nami to be released

Publish Date : Monday 22 February 2016 - 22:38
IBNA- A book containing the memoires of the Iranian Brigadier General Mohammad Hassan Nami from his childhood to heading the Geographic Organization of Iran’s Armed Forces will be released. 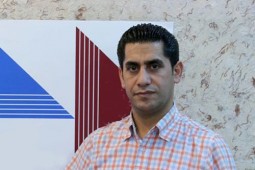 Speaking to IBNA, the author of this book Amir Mohammad Abbasnejad said that the work which is printed by the Foundation for Preservation of Sacred Defense Works and Values in Iran, describes the life story of General Nami from his childhood to his education AJA University of Command and Staff, or DAFOOS and his former position as the Iranian cultural attaché to North Korea; Head of the Geographic Organization of Iran’s Armed Forces and as Managing Director of the Ministry of Information and Communications Technology (ICT).
Nami is among those Iranian military figures who was active in the Sacred Defense (the war former Iraqi dictator Saddam Hussein imposed on Iran in 1980-1988) from the early days. When he served in Division 21 of 121 Hamzeh battalion he received a head injury.