Significance of Imam Mahdi’s ruling highlighted in a book

Publish Date : Saturday 13 February 2016 - 23:30
IBNA- Describing the ‘Encyclopedia of Imam Mahdi (AS)’ which was honored at the 33rd Iran's Book of the Year Award, Hojat ol-Eslam Ma’soudi stated that a key subject of this book is Mahdi’s way of ruling. 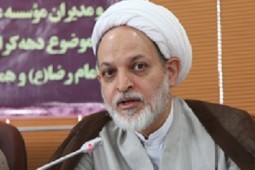 According to IBNA correspondent, ‘Encyclopedia of Imam Mahdi (AS)’ by Ayatollah Mohammad Mohammadi Reyshahri translated by Hojat ol-Eslam Abdol-Hadi Mas’oudi was released by Dar ul-Hadith Religious and Cultural Organization in 10 volumes. The book was written within 10 years and refers to 880 sources. This encyclopedia was honored at the 33rd Iran's Book of the Year Award a few days ago.
About the compilation of this 10 volume book, Hojat ol-Eslam Ma’soudi said: “This book was dedicated to the Supreme Leader of the Islamic Revolution [Ayatollah Ali Khamenei] in 2004 and was praised by the Leader who said he’d read it soon. This work is the result of 10 years of research by a group of researchers of the Institute for Religious Science and Hadith Education.”
He further added that the sources used for writing of this encyclopedia were in Arabic: “For writing this encyclopedia, the original texts of the Quran, hadiths and old books and historical manuscripts and some contemporary sources in Arabic were studied and used.