The prose of ‘Solidarity Martyrs’ is like a travelogue

Publish Date : Wednesday 23 December 2015 - 23:57
IBNA- In the unveiling ceremony of the book ‘Solidarity Martyrs’, Seyyed Abbas Salehi, said that in this work the readers are facing a prose like the travelogues. 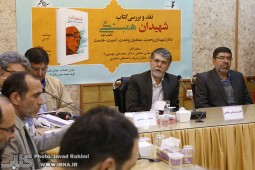 According to IBNA correspondent, the unveiling ceremony and criticism of the book ‘Solidarity Martyrs; the Second Booklet of the Top Martyr of Solidarity, the Precursors of Unity, Security and Service’ by Mustafa Mohammadi, was attended by the author and Seyyed Abbas Salehi, Deputy Minister of Culture and Islamic Guidance; Mohammad Ali Mahdavi Rad, member of the board of the Book House Institute; and General Ramezan Sharif, Head of Public Relations Department of the Revolutionary Guards of the Islamic Republic, was held on Monday, December 21, 2015 at Sara ye Ahl-e Qalam of the Book House Institute.
He continued that the author has talked with various people and that the style of handling the interviews in this book is quite different which has enhanced the charm effect.
In this event, Salehi referred to the words of the Supreme Leader about the Founder of the Revolution, Imam Khomeini, who was thankful to God for having the narrations associated with the thing witnessed and continued: “We are a generation for whom many narrations have become visible and could see what we’d heard about the Prophet Mohammad (PBUH) and his companions, in some of the characters of our own time.”