Publish Date : Saturday 24 October 2015 - 15:21
IBNA- Muharram and Ashura mourning held by the Iranian combatants in captivity during the imposed war of Iraq against Iran is manifested in the book “The leg which Left behind” by Seyyed Nasser Hosseinipour. 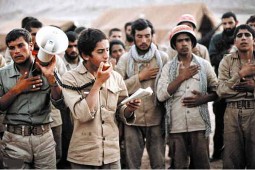 According to IBNA correspondent, the Sacred Defense is associated with the culture of Ashura. Black-clad warriors with tents and trenches in the first ten days of Muharram tried to keep the memory of friends and the glory of the rising of Imam Hussein (AS) alive in their hearts and stand against the enemy under the influence of that culture. IBNA has reviewed the Muharram in front lines through the lines written in the book ‘The leg left behind’.
This book which is written is dedicated to the Iraqi Sergeant, Valid Farhan (The watchman in camp 16 of Tikrit who brutally tortured the author in captivity).
‘The leg left behind’ narrates the memories of 808 days Hosseinipour’s captivity in Iraq’s secret prisons. He was imprisoned in Iraq from June 24, 1988 to September 13, 1990.
On pages 294 to 297 we read: “Monday, August 15, 1988, Al Rashid Hospital, Baghdad; ‘It was the second day of the month of Muharram. Dr. Aziz Nasser entered the sanatorium with a middle-aged man in personal suit whom I had never seen before. The Iraqi was wearing stylish suit. Doctor Aziz asked me, Qassem Faqih and Ahmad Sharifi, who was the youngest guy present in the sanatorium, to answer the questions of the Iraqi medical student. It seemed like he wanted to write his doctoral thesis. I think the subject was war and the young Iranian POWs.”
He said, as the military could not defend the borders of Iran, Iranian government forcibly dragged young people from schools to the front.
He asked several questions with a certain mentality. He wanted to know how popular forces could function stronger than an official army. The Department of Defense had allowed him to interview young prisoners to finish his dissertation. He took notes of our conversation. I’m not sure how fair he was in his writings. He asked about our incentives, the unquestioning obedience of the Basijis to Imam Khomeini, etc. With his simple, pleasant accent, Qassem Faqih told him: ‘I don’t know what you mean by incentive. We’ve come to defend our homeland.’
When we told him the truth of our hearts, he was surprised. He told me: “This question is nothing to do with my dissertation, just tell me if you’re upset to be our captive at this young age and to have lost one of your legs?”
I replied: “Why should I be upset?”
He said: “It’s hard for me to understand.”
I said: “You know, we who have come to the front on our own two feet, had thought of these days too.”