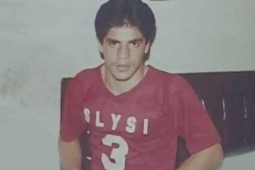 According to IBNA correspondent, the work written by Maysam (Mehrdad) Mousavian was ordered by Revayat-e-Fath Publication Institute and the research and interviews were also conducted by this institute.
Mousavian said that the 15 stories comprising ‘Guys, Don’t Be Late’ were authored within three months.
“The stories boast of documented as well as strong literary characteristics,” noted the author, adding that “Martyr Majd was the fellow-player of the Iranian football coach and former national player Amir Ghal’enoei, and was on the brink of signing a contract with Persepolis Football Club in Tehran when he went to war,” he said.
Majd was a footballer in Iran National Youth Football Team in 1982 and 1983 and played in Kingdom Cup of Bangladesh as well as Asian Youth Football Championship in Nepal and scored 15 goals for his Team.
When Majd was invited to exercises with Persepolis Football Club, he rejected it to join Prophet Mohammad Army in order to take part in Operation Karbala-5, an offensive operation carried out by Iran in an effort to capture the Iraqi port city of Basra.
He was martyred in Shalamcheh, a town located in Khuzestan Province, Iran, in March 1, 1987.