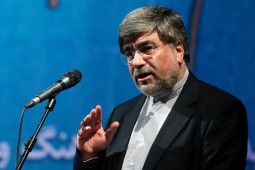 According to IBNA correspondent, the epic celebrations of Defeating Abadan Siege and unveiling the photo book ‘Joy of Union’ which contains the pictures taken during the Sacred Defense (the war former Iraqi dictator Saddam Hussein imposed on Iran) by the Commander Yahya Rahim Safavi, Senior Advisor to the Supreme Commander in Chief was held on September 27.
Attended by this Senior Commander of the Sacred Defense at the time; Ali Jannati, Minister of Culture and Islamic Guidance; Commander Salami, Deputy Commander of the Revolutionary Guards Corps and Commander Javad Khazrai, Head of the Museum of the Sacred Defense, at Persian Gulf Hall of the museum.
As a part of the ceremony, Jannati congratulated the Sacred Defense Week and said: “This week commemorates the brave and great men who sought the liberation of a part of their country and wanted nothing for themselves. Today, the decree issued by Imam Khomeini to break the siege of Abadan was realized.”
Culture Minister elaborated on the book ‘Desire for Union’, saying: “I had the honor of being a friend of Commander Rahim Safavi before the Revolution and I know him as an honest, trustworthy, hardworking and industrious person to this day.”
Elsewhere in his remarks, Jannati stated: “It will be interesting for today’s generation who hasn’t seen those days to hear and see the memories of war and commanders, audio files and many events of those eight years of the Sacred Defense, which many of them has been well-documented to date.”