New books to be unveiled during Sacred Defense week

Publish Date : Tuesday 15 September 2015 - 23:57
IBNA- Head of the Foundation for Preservation Iran’s Sacred Defense Values announced the programs of the Sacred Defense week including new books to be unveiled and providing libraries with books on the imposed war. 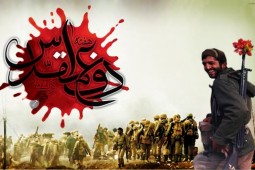 According to IBNA correspondent, Brigadier General Bahman Karegar said that releasing new books on the Sacred Defense, equipping the libraries and naming newly built libraries after the diver martyrs [whose bodies were recently found] are among these programs that are going to be held by the Iranian ministries and organizations.
“Public Libraries Foundation has on its agenda the naming of newly built libraries, which will be opened in September, after the names of martyrs and war veterans, particularly those of the martyr divers, and online competitions related to the topics of the Sacred Defense, education (Schools across the country), Sacred Defense exhibitions in various fields such as books and manual compilation of 14,000 titles available in the library of Sacred Defense museum and their distribution in research centers across the country,” Karegar stated.
Launching 4 works in Frankfurt
Head of the Foundation for Preservation Iran’s Sacred Defense Values said: “Publishing and unveiling four book titles named ‘Secret of the Red Gem’, in English and Arabic, ‘Need’, in English, ‘Two pigeons, two windows, one flight’, in English and the book ‘the Ruffian and Fire’, in English at Frankfurt Book Fair in Germany are among our plans.”