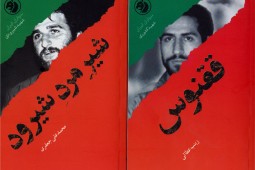 According to IBNA correspondent, Amir Kabir Publications has released two new books from the series ‘Commanders of Iran’. These books are about two martyr pilots engaged in the Sacred Defense, the war former Iraqi dictator Saddam Hussein imposed on Iran. The series ‘Commanders of Iran’ introduce Iranian generals and commanders from the ancient times to the present day in the form of pocket-sized volumes.
The book ‘Lion-heart of Shiroud’, written by Mohammad Ali Ja`fari, is one of these works that narrates the story of Martyr Ali Akbar Shiroudi in five chapters.
On page 59, it says: “Once again the tanks were so entrenched that Shiroudi felt them a real nuisance. After the occupation of some parts of Sarpol-e Zahab, the Iraqi forces had barricaded their tanks in a way so that only the guns would be seen. Targeting was almost impossible. They had crippled forces and helicopters by so doing and deceived the helicopters in the sky. Wherever they entered, they were blocked and the tanks wouldn’t leave their barracks.”
They were comfortably settled there and shot at their targets. Shiroudi was sleepless and ate little for a few nights. He couldn’t stop thinking about the tanks until it started raining one night and the raindrops made him think that something could soon happen inside the barricades. So he rushed to the barracks to tell it to the guys there.
It was a right guess. By the time they reached the top of the tanks they saw them stuck in the mud as the proverb goes. Tanks were unable to move. Rain had filled the trenches and forced them to get out. It wasn’t much better outside and they were caught in the muddy path. Now they could only turn their Jacks and fire. However, tanks were still a problem due to their great number.
Random fires had decreased the maneuverability of helicopters. The only refuge they could take was behind the hill where they were shooting. It had turned like a game of hide and seek. Helicopters would rise fast and fire and quickly go down into the pit behind the hill. Tank missiles would simultaneously hit the hill. None of the bullets hit the helicopters at first, but the mud of the blast splashed on their glass shield wasn’t any better. It blocked the pilot’s view.
They were bending forward and trying hard to look through a clean spot if any. They were running out of missiles and decided to fly away at last.