23 books published on the subject of Sacred Defense 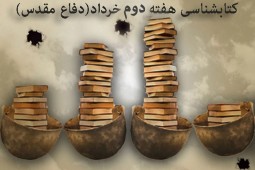 According to IBNA correspondent, based on the information contained in the site of Iran’s Book House Institute, in the period between May 30 to June 5, 2015, 23 titles have dealt with the topic of the Sacred Defense and the war imposed on Iran by Iraq, in the history and geography group.
Among these, 12 works were published for the first time and 11 books were reprinted. Darkhovin was the most active publisher of this week in the field of the Sacred Defense by publishing 6 works for the second time.
Among these works is ‘A Sunny Day with Rainy Memories which features memoires of women in the first festival of Role Models of Patience and Resistance. The book has been compiled by Maryam Vaziri Moqaddam; Mohammad Hassan Abu Hamzeh; editor: Maryam Sadat Zakariyaee – Aminian – 56 pages – composed (Paperback) – First edition in 2015 -2000 copies.