Role of the Iranian Army in Sacred Defense portrayed

Publish Date : Monday 6 April 2015 - 00:39
IBNA- The Islamic Republic of Iran’s Army role in the 8-year war with Iraq (Sacred Defense) has been portrayed in a book to be used by the narrators of ‘Rahian-e-Nour’. 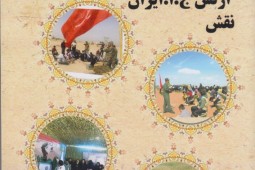 According to IBNA correspondent, the book titled ‘The Role of the Army of the Islamic Republic of Iran in the Eight-Year Sacred Defense' for the use of the narrators of this war’s events is released. This book has been co-authored by Staff General. Reza Khorram Tousi, Lieutenant Staff General Ebrahim Golfam, edited by Staff Colonel Rahim Rafiee, and Lieutenant Colonel Ali Akbar Beheshti.
The purpose and technique of narration, the Army’s ability on the eve of the war, the Air Force and Marine Corps of the Army, disabling the Iraqi Air Defense, and the role of the IR Navy in the eight years of war are the titles of some parts of this book.
On page 16 of the book we read; “It is very important to know where exactly the narration is taking place. The impact of narration on its audience is important as it changes with the environment and the special circumstances of the events, and the skilled narrator should use his intelligence and take the special location of his narration into account.”
This book has been published by the Institute for the Preservation of Relics and Values of Sacred Defense, in 200 copies and 243 pages. It has been offered free of charge in the New Year camps of ‘Rahiyan-e-Nour’ this year.