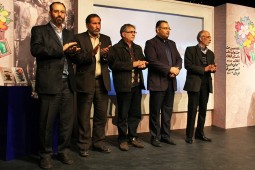 The Closing Ceremony
According to IBNA correspondent, the Seventh Festival of the Revolution Story was held this evening at the Art Center. Various categories of the festival were:
Adolescents' Short Story Section
Series of stories ‘Reza Badali’, by Rafi` Eftekhar
Series of stories ‘Daughter of the King of Fairies’, by Roqayeh Sadat Safavi
Series of stories ‘I Still Long for Your Look’, by Zeinab Emami
Winners of Short Stories for Adults
Series of stories ‘Burgundy Hair’, by Masoumeh Hosseini
Series of stories ‘Hot Wind’, by Ehsan Qadiri
Series of stories ‘Assad’, by Mohammad Hossein Ahmadzadeh
Winners of Teen Novels
The novel ‘Winter without the Prince’ by Fatemeh Nafari, the third winner
The novel ‘Myansi’s Joining Together’, by Mehdi Kord Firouzjani, the second winner
The novel ‘White Darkness’, by Sajjad Khaleghi, the top winner
Winners of the Adults' Novels
The novel ‘The Seventh Dakhil’, by Mohammad Rouygar, the third winner
The novel ‘Ang-e Tilem’, by Meisam Amini, the second winner
No work was selected as the top winner in the seventh edition of the Story of Revolution in the adults’ novel section, and there were no top winners in the other three parts. Winners were offered Honorary Diplomas as well as cash prizes.
The seventh edition of the Story of the Revolution Festival was held in the presence of Mohsen Mo’meni Sharif, Ali Reza Qazveh, Mohammad Ali Qodini, Hossein Fattahi, Hojjat-ul Eslam Saeed Fakhrzadeh, Ebrahim Zahedi Motlaq and the daughter of Amir Hossein Fardi.