‎14 Iranian books translated into Turkish will be unveiled at FBF‎

Publish Date : Wednesday 9 October 2019 - 16:09
IBNA- At the upcoming 71st Frankfurt Book Fair (FBF), 14 Iranian books which have ‎been translated into Turkish through the Grant Plan will be unveiled. ‎ 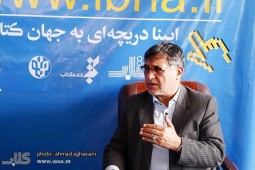 Speaking to IBNA, Ali Fereidouni, the Secretary of the Grant Plan of Iran’s Ministry of Culture and Islamic Guidance which aims to promote the translation and publication of Persian books into other languages explained about the books which are produced under the plan to be displayed at 71st Frankfurt International Book Fair.

“The book ‘My Moon, Our Moon’ Authored by Anahita Teimourian published by Iran’s Center for Intellectual Development of Children and Young Adults in cooperation with Kia Literary Agency and Damla Publishing has been translated into Turkish and printed,” he said.

“The books ‘Yasamin’ by M. Moadabpour; ‘Purgatory but Paradise’ by Nazi Safavi; ‘Who Knows Mr. Pink’ by Mojgan Kalhor; ‘Where’s My House’ by Reza Dalvand; ‘The Legend of Onion’ by Fatemeh al-Zahra Emami; ‘In the Middle of the Dark Corridor’ by Mahdi Rajabi are among the other books of the list,” the Secretary of the Grant Plan said.

Fereidouni added: “The other work which was translated and published in Turkish is ‘Tunneling Race’ by French-Iranian writer Claire Jubert, the result of the direct cooperation between our secretariat and Turkish publishers.”

It should be noted that in this edition of the Frankfurt Book Fair, for the first time a catalog has been provided which introduces foreign publishers to the methods of cooperation with the Grant Plan of Iran’s Ministry of Culture and Islamic Guidance. The catalog has been published in 12 languages, Arabic, Chinese, Urdu, English, French, German, Italian, Korean, Russian, Serbian and Turkish.