A statue by Tanavli to be installed in National Library

Publish Date : Tuesday 10 September 2019 - 15:18
IBNA- Describing the plan of establishing the Association of Written Heritage ‎Supporters, Director of Iran’s National Library and Archives announced that a statue by ‎the leading Iranian sculpture Parviz Tanavoli will be installed in the library.‎ 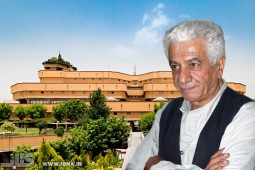 Parviz Tanavoli
Speaking to IBNA correspondent, Ashraf Boroujerdi spoke about the efforts made by the National Library and Archives Organization: “The statue has been designed and constructed for the Association of Written Heritage Supporters and will be installed in December.

“We are among the few countries in the world whose written heritage has been authored by the thinkers whose works are known throughout the world,” she said.

“Like the United States and Canada, Iran is among the few countries whose center of documents and national library are combined in a single organization,” Boroujerdi added.

Parviz Tanavoli (1937) is an Iranian sculptor, painter, scholar and art collector. He is known for his heeches, three dimensional representations of the Persian word for 'nothing', heech. Composed of three Persian characters in the style of nasta'liq script. The three letters he, ye and če are combined to produce the word ‘heech’.

Tanavoli has lived in Vancouver, Canada since 1989. His work has been auctioned around the world leading to overall sales of over $6.7 million, making him the most expensive living Iranian artist.