Publish Date : Tuesday 27 August 2019 - 17:15
IBNA- Paul Timmerman, a Belgian musician says that he was interested to work on ‎Iranian music but that was difficult without knowing Persian language which prompted ‎him to learn it.‎ 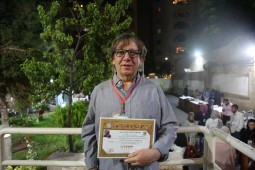 Paul Timmerman‎
Speaking to IBNA, the Belgian musician Paul Jules M.Timmerman who participated in the 87th Persian language improvement course held by Sa'di Foundation in Tehran described the background of his acquaintance with Persian language.

"I first heard of Persian language when I was 19 years old and at that time I felt that it is a very sweet language. I have an Iranian Portuguese friend who is also my bandmate. I decided to learn Persian to understand the details of Persian music and its instruments," he said.

I'm from the city of Liège in Belgium but I'm studying music at the University of Lisbon. One of my instructors at the University knows Sa'di Foundation and suggested me to visit Iran and the foundation," Paul stated.

The Belgian musician pointed out that before his travel to Iran he had not so much information about our country: “Although I have  Iranian friends in Belgium, I didn't get that much from them about Iran. I only knew that Iran is a beautiful country with interesting landscapes and ancient places. Then I visited Tehran and Hamedan, however I have been more interested to see Iranian natural landscapes.”

"Earlier, I was scarcely familiar with Iranian poets but now I've become acquainted with the works of Rumi and Hafez and I'm eager to read their poems in Persian, [which of course play a key role in traditional Iranian songs],” Paul added.