National Festival of ‎Shams and Mewlana (Rumi) to kick off 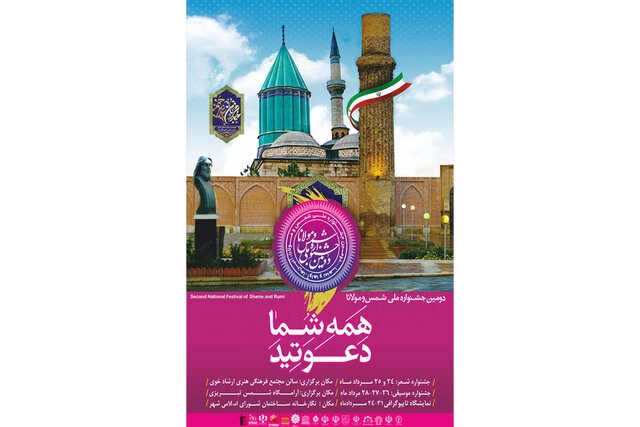 According to IBNA correspondent, Executive Secretary of the Second National Festival of ‎Shams and Mewlana Reza Ja’farpour said that 1286 works of poetry, music and typography were received by the secretariat of the festival as poets from 31 Iranian provinces, music ensembles from 29 provinces and typographers from 18 provinces submitted their works to the festival.

“Out of the total number of works received, 720 are in accordance with the principles defined by the festival and were submitted to the jury panel for further considerations,” he said.

Executive Secretary of the festival stated that as well as establishing the status of this national event in Iranian cultural calendar, the lineup of the jury panel is one of the reasons for the nationwide participation of artists at the festival.

“Poetry Festival will be held on August 15-16, the music festival is scheduled for August 18 to 20 in [the northwestern Iranian city] Khoy with top officials of the country in attendance.

He further said that based on coordination with the Ministry of Culture and Islamic Guidance of West Azerbaijan, as well as the representatives of Iranian media, correspondence from Turkey’s Anatolian news agencies, Sputnik from Russia, France 24 and DHA from Turkey will cover the festival in Khoy.

Regarding the fact that the Mausoleum of Shams-e Tabrizi is located in Khoy, the annual art festival and an international scientific conference are held in the city and measures are being taken to announce the sisterhood of the two cities of Khoy and Konya by Iranian and Turkish officials.