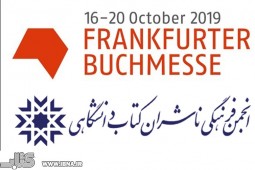 Speaking to IBNA, Executive Director of Cultural Association of Iranian Academic Books Publishers Abbas Hosseini-Nik said: “It's the fourth consecutive year that our association is participating at Frankfurt Book Fair.

“We make efforts to put the works of Iranian authors and researchers on public display in FBF,” he pointed out.

Hosseini-Nik referred to the interaction of the association with literary agencies to introduce Iranian academic books to foreign publishers and meetings are due with them in Frankfurt.

Executive Director of Cultural Association of Iranian Academic Books Publishers added that consultations have been made to hold seminars with academic publishers associations in countries such as Germany and India and such discussions will be continued in FBF.

Frankfurt Book Fair is a major cultural event: around 7,300 exhibitors from over 100 countries, more than 275,000 visitors, over 4,000 events, around 10,000 journalists and 2,400 bloggers make FBF the world's largest trade fair for publishing every year.

The 71st Frankfurt Book Fair is slated for October 16 to 20.