Book House stall in TIBF, a hub for literati

Publish Date : Sunday 5 May 2019 - 18:21
IBNA- CEO of Iran's Book House Institute Niknam Hosseinipour said that the stall of the ‎institute in the 32nd Tehran International Book Fair (TIBF) turned to a hub for Iranian ‎literati and the activists of publishing industry.‎ 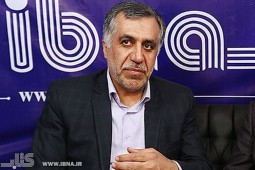 Niknam Hosseinipour ‎
In an interview with IBNA, Hosseinipour spoke about the programs and achievements of Iran's book House Institute (IBHI) at the 32nd Tehran International Book Fair which wrapped up on Saturday.

At the beginning, he said: "IBHI followed a number of plans in TIBF such as taking consideration of issues related to Iranian publishing institutes and associations including the associations of editors, translators and illustrators whose representatives expressed their concerns at meetings with us."

"We also held pathology meetings on several fields of study such as Iranology, philosophy, history and history of science. One of our key approaches is to improve the quality of books. Regarding the fact that 100,000 titles of books are published in Iran annually, we are tasked with helping the readership to choose the best works among them," he said.

"During our meetings with writers, translators, publishers and other book activists in the stall of the Book House Institute, we collected their views and will consider them to help both our institute and the Ministry of Culture and Islamic Guidance to make the best decisions about issues related to the literati and publishers," Hosseinipour stated.

He referred to one of the special meetings held at the stall in the 32nd Tehran International Book Fair titled "The Future of Book" which is one of the concerns of the Book House Institute: "The first steps were taken during the fair and the meetings will be followed by the Cultural Deputy of IBHI."

On the goals achieved by Iran's Book News Agency (IBNA), Hosseinipour said: “Many Iranian officials, directors, literati and publishers attended the stall of IBNA in the 32nd TIBF which proves that this news agency has achieved a special status as a reliable source among the Iranian book activists.

Elsewhere in his remarks, Hosseinipour pointed to the services given by IBHI to the Iranian literati such as providing special vouchers and organizing honoring ceremonies for literati on all occasions which according to him should be improved.

Iran’s Book House Institute is the main institute in the country tasked with providing information about books and print industry in Iran. The entity has also other tasks to accomplish such as responsiblity for holding Iran’s Book of the Year Award and Book of the Year World Award.