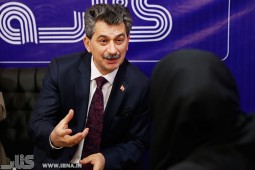 Derya Örs ‎
Speaking to IBNA correspondent, Örs who is also an Iranologist noted that he has been visiting Tehran International Book Fair from 1992 and it’s the fifteenth times he is attending this event.

“In terms of the number of participants and visitors as well as the area, Tehran International Book Fair is one of the largest in the world. TIBF enjoys a high standard and whenever I attend it, I observe its improvement and development,” he said.

“Elsewhere in his remarks, the ambassador said due to my interest in Persian language, I have closely studied Iranian books and journals particularly in the fields of social sciences, literature, history, philosophy and religion for many years.”

Describing the programs of Turkey for introducing the works by the writers of the two countries, he said: “The works of prominent writers of Turkey not only are translated and published in Persian but several other key languages throughout the world. Also, for our part are enthusiastic about Iranian books and have translated and released several works by Iranian masters of fiction and poetry.”