Chinese here to sell their copyrights not buying Iranian copyrights 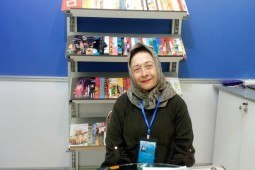 “In the stands of other foreign countries who have participated in the 32nd TIBF, we see that they have sent some Iranian young staff or some members of their friendship associations with Iran,” she said.

“Chinese publishers who have attended TIBF for the most part governmental, although it was expected that private independent publishers from all around the world participate at the event,” Khal’atbari pointed out.

“For instance one of the Chinese publishers which has attended the event is Shandong Publishing which had some deals with us buying and publishing our books in the past, but their representative in the current fair a salesperson,” Director of Shabaviz Publishing added.

Tehran International Book Fair is the top Iranian book event held annually. China is the guest of honor of the 32nd edition of this event which is currently underway and will run by May 4 in the Mosalla of Imam Khomeini in Tehran.