Iranian book of poems to participate at FICEP Festival

Publish Date : Thursday 18 April 2019 - 17:01
‎‘The Journal of Love’, a book of poems by the late Iranian poet Afshin Yadollahi which ‎has been translated into French will participate at the prestigious FICEP Literary ‎Festival in France.‎ 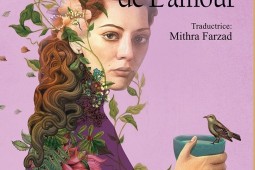 Speaking to IBNA correspondent, Director of Candle & Fog International Publishing in Tehran Afshin Shahneh-Tabar which has released the French translation of the work said that the FICEP Literary Festival which is scheduled for May 26 will have a special program for Yadollahi in which the French translator of ‘The Journal of Love’ Mitra Farzad will participate.

“The program will also introduce Iranian contemporary literature, modern Iranian poetry as well as the role Yadollahi played in the post-revolution Iranian music as a lyricist,” Director of Candle & Fog International Publishing said.

“The book has also been translated into English by Caroline Croskery and into Russian by Elaheh Kasmaei and published,” he added.

Afshin Yadollahi (1969-2017) was a and psychiatrist who was particularly known in Iran for his lyrics on some famous songs in Iranian films and TV series.