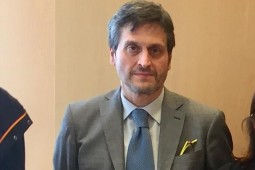 Marco Momoli‎
Speaking to IBNA correspondent, Momoli said that Bologna Children’s Book Fair has been held permanently for 56 years and even predates Frankfurt International Book Fair. It is actually regarded as the most significant venue for introducing children books and a forum for interaction among the producers of books for children and young adults.

“At the beginning, Bologna book fair was not deemed so important and children book fairs in English-language countries were ahead of us in holding such events. However, Pierre Marshall, the head of a famous publishing house in France attended BCBF and expressed his satisfaction of the book fair, so, then the event received more credit and became important. In the course of time, the venue was relocated from its first place to the current one,” he said.

“The 56th edition of Bologna children book fair was held as Switzerland was our guest of honor and 1200 publishers from 80 countries participated at the event,” the director added.