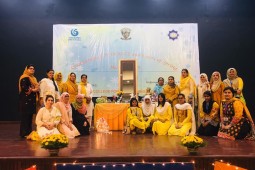 Speaking to IBNA, Faliheh Zahra Kazemi, Head of the Persian Language and Literature at Lahore College for Women University, said that the event was held in Pakistan concurrent with Iran and several other places in the world.

“As Head of the Persian Language and Literature I as well as some other instructors made a brief speech on the occasion and then the students began to recite Persian poems. Moreover, one of the students of Persian language who had provided the documentary film on Norouz and spring celebration in Pakistan screened the work,” she added.

“At the end of the program, ten guests who attended the ceremony received the special Norouz gift based on a lottery,” Kazemi added.

Established in May 1922 as a women's college, the universities is one of the oldest female institutions of Pakistan, the university has 15,000 students and a teaching faculty of 450. It admits students at the intermediate, bachelor's, master's and Ph.D. levels.