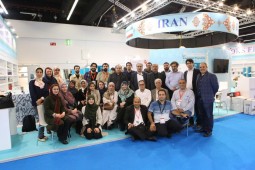 In an interview with IBNA correspondent, Hesam Sobhani Tehrani said: “By participating at the 2018 Frankfurt International Book Fair, we followed three objectives: first, we pursued our earlier plans for buying book copyrights. Second, we held meetings with publishers and literally agencies from the United States, Canada, England, France, Italy, Australia and Netherlands; and third, we wanted introduce our books to literary agencies and readers.

Referring to the status of Frankfurt Book Fair, he said: “FBF provides an excellent opportunity to attend the International arena but such communication should be permanent throughout the year to help you achieve a better result.

Elsewhere in his remarks, he indicated that Mobtakeran Publishing in collaboration with Kia Literary Agency has purchased book copyrights from the European and American publishers including Dk (U.S.), 'The Quatro' (England) and Minedition (Germany).