Publish Date : Saturday 29 September 2018 - 19:36
IBNA- Director of Iranian Paidayesh Publishing announced his participation in Frankfurt ‎Book Fair stressing that attending such events has remarkably boosted the standards of his ‎books in terms of choosing subjects, illustration and layout.‎ 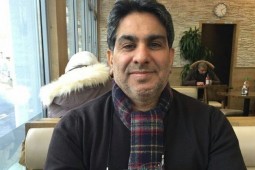 In an interview with IBNA, Mohsen Ta'eb said that he will attend Frankfurt Book Fair (FBF) in two sections of books for adults and books for children and young adults: “In the children section, we have sent a number of our works to the Cultural Association of Children Books Publishers to introduce them at FBF. But in the adults section, we have a special stand and will present 30 titles of books on the subjects of political ideas, novel and fiction in general."

"Director of the international relations department of Paidayesh Publishing will be there based on our earlier negotiations with a number of publishers from the other countries. We will meet publishers from Netherlands, France and Germany in our stand and in their stands," he stated.

Ta'eb suggested that facilities provided by Iran's Cultural Fairs Institute (ICFI) during the last years, has enabled the Iranian publishers to have their own stands for direct presentation of their works and communication with foreign publishers.

“Regarding the complications of Iranian political climate in recent years, as well as the intricacies of copyright business, the publishers from other countries are afraid to refer us and exchange copyright. However, we could discuss selling copyrights of our three children and young adults books with publishers from Turkey and France. For our other works on Iranian classic literature, we have launched negotiations with a publisher from China,” he added.