Publish Date : Thursday 30 July 2015 - 16:01
IBNA- ‘Poetic Pyramid of the Pioneering Tragedy’ and ‘A Formalistic Study of the theme of Letter in Shakespeare’s Tragedies’ are the most recent books by Helen Oliyayi-Nia, Iranian translator and literary critic published in English. 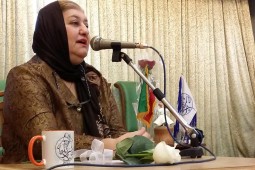 In an interview with IBNA, Oliyayi-Nia said that she also plans to publish the collection of her literary and artistic papers titled ‘Eternality Ambition’.
“A few books I’d written in English were published by Nahoft Publications in 2015. ‘Poetic Pyramid of the Pioneering Tragedy’, ‘A Formalistic Study of the Theme of Letter in Shakespeare’s Tragedies’, ’Developing Ideas Through Poetry’ and ‘Decoding the Story’ are the titles of these books. They mostly target students of English literature,” Oliyayi-Nia stated.
She added that the other book she is now compiling and preparing is the selection of her journalistic articles titled ‘Eternality Ambition’. There are 200 articles in this book mostly on topics such as film criticism, study and analysis of plays, poetry and stories published in various publications, etc., which are to be republished.
This translator and critic of literature and arts also pointed to reprinting some of her books and said: “In the year 2000, I had released a book titled ‘Short Story in the Mirror of Review’ published by Farda Publications. The book covered my analysis of 31 short stories by Iranian and foreign writers which was faced with a great welcome.”
“I tried hard these years to convince the publisher to republish this book, but in vain. This book is also going to be published by the end of this year by adding the analysis of several new stories,” Oliyayi-Nia added.