More details about the global picture of Iranian literature given 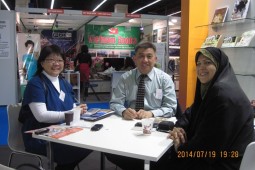 In an interview with IBNA, she said: “The stand of an American publisher had displayed a book with the topic of dress and clothing of the women of the world. The book covers about 10 pages on women’s clothing in Iran. These few short pages about our country in a book written by an American publisher are quite exciting to us. Also, the role of Iran in Frankfurt Book Fair and the world literature seems quite pale.”
Ramhormozi, author of ‘The Last Sunday’ was the guest at Frankfurt Book Fair in 1993. She has penned her observations and interpretations of this 5-day trip on paper. She has approached this cultural phenomenon with a new glance and encourages the reader to follow the presence of Iran in this Fair beyond something as a repetitive and stereotyped event.
Iranians living in Frankfurt participated in the unveiling ceremony of Mr. Qeisari’s book. In a brief interview with Mr. Qeisari, I asked him about his stories. However, I stress that I am not a novelist and am only interested in the general public opinion. Mr. Qeisari listened to me with dignity and described his views with honesty. This writer of short war stories is not interested in debate and does not want to prove himself.
The number of those in charge in the stand is no more than 10. A few ladies with colorful clothes and scarf answer the visitors.
The stand belonging to Malaysia is an integrated hall with racks arranged in a stylish lounge at different angles. Each shelf is devoted to a particular topic. I called my friend to show her the clever arrangement of Malaysian publishers. There are business cards of the publisher of each book, next to each rack with the name of the publication, the manager, phone number and email printed. Pictures on the book covers are childish and cheerful. I flipped through the books, one by one to see them. Great diversity and number of religious books in this stand attracts our attention.
Several writers are busy signing books for the readers in line. We watch the ceremony with pleasure for a few minutes and then leave.