God freed Khorramshahr/Pictures narrate the calamity of the city

Publish Date : Sunday 24 May 2015 - 23:56
IBNA- Amir Ali Javadian, an active Iranian photographer in the field of Sacred Defense (Iran-Iraq War) is one of those who have recoded events like the liberation of Khorramshahr in the history. 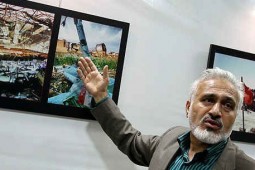 In an interview with IBNA, he said: “What language other than photography could reflect the calamity and destruction of Khorramshahr and the miseries inflicted on its people? Photographers are contemporary historians and photographs of the war recount a true story of our contemporary history.”
Pictures are so clear that there is no way of ignoring them. Many years have passed since the days when “Amir Ali Javadian” stared through the lens of his camera at the men who had reached into the middle of Khorramshahr shouting, “We are the men of the war”.
Photographers like Amir Ali Javadian, Reza Mohammadi, Kazem Akhavan, Saeed Sadeqi, Hossein Heidari and many more were still staring behind lenses when somebody, who happened to have a pen in his hand, wrote “We are the men of the war” on a piece of cardboard and early in the morning of May 24, stuck it on the fragmented dome of the mosque of Khorramshahr.
Flash sounds of the analog cameras would become the clear voice of the history for me and other children of the 1980s and later years who do not know much about the war; this is what defines homeland for us.
Pictures talk
Javadian believes the language of pictures is more pronounced than other forms of art, and so far we agree with him. Ever since the modern man has adopted other languages such as photography, music, painting and even cinema for better communication, all these have become the language of art. These are far more efficient and dynamic than the verbal language as they can transfer thoughts, feelings and worldly outlooks besides the story itself.