Publish Date : Wednesday 20 May 2015 - 16:16
IBNA- Director of the executive committee of the 28th Tehran International Book Fair (TIBF) Hossein Safari said compared to its past editions, international section of this year fair showed to be more improved. 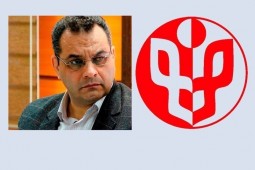 Hossein Safari
In an interview with IBNA, Safari stated: “We followed instructions given by the Director of the 28th Tehran International Book Fair [Seyyed Abbas Salehi] which was based on reducing the expenses for holding this event, however, we could manage the international section more successfully than previous editions.”
“The executive measures for holding the 28th Tehran Book Fair were taken from the last December in Imam Khomeini's Mosalla where the construction operations launched. Fortunately in this edition of the fair we could facilitate the access of visitors to various parts of the TIBF and lessen the overcrowding, presence of too many people in some places,” he said.
“Moreover, we could both maintain the previous sections which visitors had in mind from the previous editions of Tehran Book Fair and add new sections. In other words, we engineered the event in a way that we could take the best advantage of the existing,” Director of the executive committee of the 28th added.