Publish Date : Monday 18 May 2015 - 20:58
IBNA- Translator and author Media Kashigar said that if Iranian poets and writers failed to get the Nobel Prize in literature, it is because they did not deserve it.” 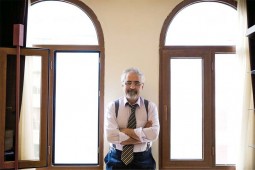 In an interview with IBNA, Kashigar said: “Iranian writers and poets might not have had the primary conditions for receiving the Nobel Literature Award. The first criterion to receive the Nobel Prize is to have the works receiving the award translated into Swedish, Norwegian or other Scandinavian languages.”
He continued: “Of course, I am not among the Nobel Prize Academy to deliberate on this matter. The first criterion for the Nobel Committee is to have the works translated into one of the languages of the Scandinavian countries.”
In response to the question “Is the Nobel Literature criteria not political?”, he reminded: “I can’t be sure to talk about it because as I said I am not a member of the Nobel Committee, but as far as I know, many great writers and poets such as Jorge Luis Burges have not received this award and therefore not having received the award should not be a problem for us.”
The translator of the book ‘About translation’ written by Paul Ricœur added that there are more than 10,000 literary awards given throughout the world and Nobel Literature Award is simply one of them, so our writers should not be so much concerned about this.