Publish Date : Wednesday 13 May 2015 - 09:57
IBNA- Senegal Ambassador to Iran Baba Karba announced the holding of a book fair in Senegal and invited the Iranians to take part in it. He also suggested the book ‘Maryam Anba’’ for translation into Persian. 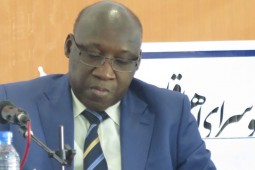 In an interview with IBNA, Baba Karba, the Senegalese Ambassador to Iran, spoke about publications condition in his country and said: “In Senegal, no taxes are paid for publishing books and there are N.G.Os that work for writing books and their publications.”
He introduced Senegal as a country with rich literature and culture, and added: “The greatest library in the African continent is located in our country. All schools of thought are free to publish their opinions. We do not believe in censorship; we respect freedom of opinion and do not worry about it.”
The Ambassador of Senegal to Iran talked about the works translated into Persian in Senegal and said: “The first wave of Senegalese educated in Iran was committed to this effort. I believe there are many works for translation for both countries and nothing much has been done in this respect.”
In the field of literature, Baba Karba offered the book “Maryam Anba’” for translation into Persian and said: “This book contains a lot of information about the Senegalese culture. There are also religious books about the Senegalese religious scholars which can be interesting for the people of Iran.”
He expressed his surprise at the interest of Iranians in reading and stated: “A great Book Fair is about to be held in Senegal and we invite Iran to take part in it.”