A book on Iranian cartoonists: “Ten Cartoonists” is unveiled

Publish Date : Sunday 26 April 2015 - 22:29
IBNA- ‘The Ten Cartoonists’, a book written by Seyyed Amir Soqrati, consisting of an introduction and the most important works of Iranian cartoonists including Ardeshir Mohasses, Kambiz Derambakhsh, Ahmad Arabani, etc., is published by ‘Ideh’ Publications. 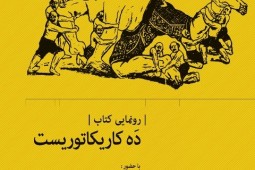 In an interview with IBNA, Seyyed Amir Soqrati, the author of the book ‘Ten Cartoonists’ said: “Ten Cartoonists consists of an introduction of the most important and influential cartoonist including Ardeshir Mohasses, Kmabiz Derambakhsh, Parviz Shahpour, Javad Alizadeh, Ahmad Arabani, Morteza Ramezani, Mohammad Ali Bani-Assadi and some others.”
He added that this book which will be unveiled on May 1, 2015 at Café Ideh, is written with the aim of acquainting the young generation, but due to being the first book ever on this special topic, it is also considered a reference. A brief history of the evolution and development of the art of caricature has been presented to the audience in the introduction.
Soqrati pointed to the unveiling ceremony of the book ‘Ten Cartoonists’ and said: “the unveiling ceremony will be held on Friday evening, May 1, at Café Ideh in the presence of Sajjad Baghban, research and education vice president of the Iranian House of Artists, Mohammad Ali Bani Assadi, Davoud Shahid and Arash Sultan Ali.”